“The retreat” Artwork by Ajaya Kumar

This artwork is a part of the art exhibition “Boundless Limit” 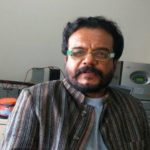 Ajayakumar is a contemporary artist from Kerala. Since 1983, he has participated in various group shows in India and abroad. During 1988-91 and 1996-2001, Ajayakumar served to the Kerala Lalitakala Akademi, which marked the establishment of the Kerala Lalithakala Akademi complex at Thrissur and the Durbar hall Art Centre Kochi.

The National Art Camps and seminars of this period brought major contemporary Indian Artists and thinkers to Kerala. Ajayakumar had his solo exhibitions at the Contemporary Art Gallery Ahmedabad(1984) Jehangir Art Gallery Mumbai (1986 and 1990). Art Heritage, New Delhi (1992 and 1993).

From 1986 to 89, he has been researching the Visual aspects of the ritual and performing arts of Kerala, which helped him to conceptualize his paintings to culturally specific areas. In May 2006, Ajayakumar had completed a massive exterior mural painting at “Over the hill resorts” He has also been associated with Shaji N.Karun, an eminent filmmaker for his TV film on KG Subramaniyan called the “Moving focus” and “Yathraykidatil”- a fiction. Ajaykumar has also done a site-specific installation called “3 PM memories reconstructed” during 2005 at P Krishnapillai memorial

You have already reported this .
Clear Clear All